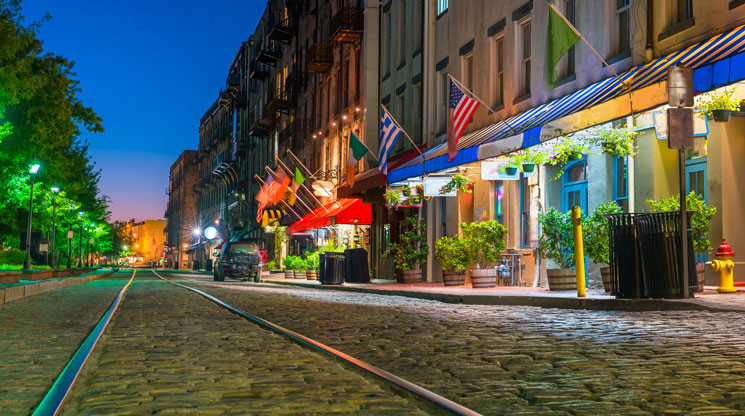 Located just a few miles east of I-95, Savannah, Georgia was America’s first planned city and has become a popular stopover point for those heading south to Florida. With plenty of history, nearby beaches on Tybee Island, and warm winters, the oldest city in Georgia has become a popular spot for people to live and visit. It was recently named by WalletHub as one of the 100 fastest growing cities in the entire U.S. Even though it’s currently popular, the city has also taken initiative to ensure that it remains a hotspot in the South for years to come.

Savannah played a major role as a port city from the American Revolution in the 18th century, and has remained a popular port city ever since. Savannah faced Urban Decay during the 1960s, until the River Street Urban Renewal Project came about. This helped revitalize the waterfront area.

Savannah is also known for its numerous squares, some of which were demolished for parking garages and buildings in the middle of the 20th century. Starting in 2010, the city has been able to restore Ellis Square by moving the City Market parking garage underground, and is currently working on restoring Elbert and Liberty Squares.  According to Savannah Now, the city currently has plans to begin historical preservation, economic development, and infrastructure improvements in West Downtown.

The historic district in Savannah is charming and is one of the first things people think of when visiting. Chippewa Square is a must-see for fans of Forrest Gump, as Tom Hanks told his story on a bench in the park (which is actually at the nearby Savannah History Museum). You can also take various tours of downtown and learn about who lived in what homes. After touring, you can find some great restaurants, including Cotton & Rye and Mrs. Wilkes Dining Room.

This street now contains various shops and restaurants from the intersection of Martin Luther King Jr. Blvd. heading east towards East Broad Street. If you’re looking for a place to stay, the Hyatt Regency Savannah is also located on this street. River Street Market Place is a must visit for those interested in shopping, as it features 72 booths with goods from around the world.